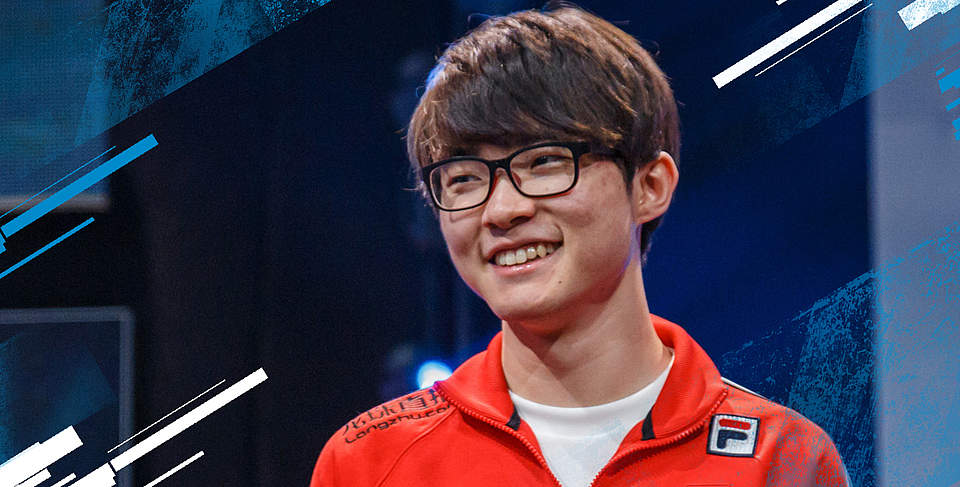 Lee “Faker” Sang-hyeok was pulled out of solo queue by the SK Telecom organization so that a team could be formed around him in the mid lane. Ultimately they settled on Impact, bengi, Piglet, and PoohManDu to surround him and the team was unveiled in February of 2013, dubbed SK Telecom T1 2. They qualified for their first OGN at OLYMPUS Champions Spring 2013. They exceeded all expectations and placed 3rd, losing 3-1 in the semifinals to MVP Ozone but beating CJ Entus Frost 3-0 in the third-place match. Faker’s dominating performances put him in the conversation for best mid laner in the world after just one tournament. The team was renamed to SK Telecom T1 after their sister team, SK Telecom T1 1, was disbanded. With a great first result under their belts, they attended HOT6iX Champions Summer 2013. Faker continued his fantastic play and led his team to a reverse sweep of the KT Rolster Bullets and earned them a berth at the Season 3 Korea Regional Finals. They were seeded directly into the finals and met the Bullets again, only to soundly beat them 3-1. SK Telecom qualified for the Season 3 World Championship as the final Korean seed but still came in as the favorites to win the whole tournament. Faker crushed the competition and the team put up an impressive 15-3 record across the tournament, culminating in a one-sided final where they beat Royal Club 3-0 and became the new world champions. Faker’s brilliant play across the season earned him the title of the best player in the world by most fans and experts alike. The SK Telecom organization picked up a new sister team, ultimately named SK Telecom T1 S, so Faker’s team was renamed to SK Telecom T1 K.

The new season started even better for K at PANDORA.TV Champions Winter 2013-2014. They didn’t lose a single game and put up the greatest performance a team has ever had at an OGN tournament. They swept Samsung Ozone in the finals and Faker proved himself as the greatest LoL player of all time after just a year. However, the success wasn’t meant to last after ManDu stepped down due to health issues and the team picked up Casper. An ultimately poor showing at HOT6iX Champions Spring 2014 was capped off with a 3-1 loss to Ozone in the quarterfinals. ManDu rejoined the starting line up before All-Star Paris 2014, where the team was expected to falter. In typical fashion, they swept the whole tournament and earned a clean 9-0 record, ending in a dominating final against OMG. They returned to Korea with high hopes to participate in HOT6iX Champions Summer 2014 but ended up mirroring the results of their last OGN, losing 3-1 in the quarterfinals to Samsung White. They lost in a tiebreaker for the 2nd Korean seed to worlds, again to White, by being swept. K was seeded into the finals of the 2014 Season Korea Regional Finals but ended up losing 3-1 to NaJin White Shield and missed Worlds.

Changes to the OGN rules forced K and S to merge, forming SK Telecom T1. Most of the old K roster was removed, except for Bengi and Faker, while MaRin, Wolf, and Bang filled out the rest of the line-up. Easyhoon and Faker shared the starting mid lane spot for SBENU Champions Spring 2015, to the disappointment of many fans who wanted to see Faker play in every game. Despite SK Telecom’s strong performance in the informal Spring Preseason, they were not the top team in the season itself, and it was the newly-formed GE Tigers who were invited to IEM Katowice as the top team from Korea, not SKT. And SKT finished second in the season overall, with an 11-3 record – one game behind the Tigers. Regardless, in the playoffs, SKT beat both CJ Entus and the Tigers – without Faker even starting for a single game against the Tigers.

Their spring season championship qualified SK Telecom for the 2015 Mid-Season Invitational. There, they swept the group stage 5-0 but then dropped two games to the European Fnatic in the semifinals, beating them 3-2, with Faker starting each game. In the finals against EDward Gaming, Easyhoon started for the first three games, and SKT ultimately lost 3-2. In the final game of the set, EDG famously left open LeBlanc for Faker – a champion he was until then undefeated on – and counterpicked it with a mid lane Morgana for pawN, running a composition designed to shut down Faker.

After the Mid-Season Invitational, SKT bounced back and won the regular season of Champions Summer, dropping only one set along the way – though it was the set that would have made them the first team worldwide to clinch a Worlds seed (they ended up clinching their seed when the GE Tigers lost their very next set as well). Faker played 12 unique champions in his 29 games, innovating mid lane Irelia, a pick that would become a relatively popular off-meta pick around the world, and Master Yi, a pick that would not. Seeded directly into the playoff finals this time, SKT easily swept KT Rolster 3-0 (Faker played all three games) to earn Korea’s top seed to the 2015 Season World Championship. SKT was placed in a group at worlds alongside EDG, Bangkok Titans, and H2k Gaming. They went undefeated all the way to the finals, beating AHQ e-Sports Club and Origen in the playoffs along the way. They met the KOO Tigers in the finals and beat them 3-1 to give the organization its second World Championship. This made Faker one of only three people (the other two being his coach kkOma and Bengi) to have won the World Championship twice.

Two weeks after the World Championship, SK Telecom played in the LoL KeSPA Cup. In their semifinal series against Challenger team Ever, substitute mid laner Scout started in the first game, but even with Faker playing in the second game, the team lost the series 0-2 – continuing a streak of World Champions being eliminated early on in their first tournaments after Worlds. SK Telecom announced Faker’s re-signing for the 2016 season after the tournament.[15] In March, SK Telecom attended IEM Katowice despite being only the sixth-place LCK team at the time. They brought substitute jungler Blank in place of Bengi and swept through the tournament, winning the title after only seven games. After returning to Korea, a rejuvenated Faker helped the team climb back up the standings and eventually win his fifth Korean championship and third consecutive title. This win allowed SKT to return to the Mid Season Invitational, the only team to return from the previous year.

Their first-place finish in the spring season earned them a spot in the 2016 Mid-Season Invitational. Notably, SK Telecom T1 was the only team to return to 2016 MSI from 2015 MSI. As the reigning domestic champions of Korea, SK Telecom T1 came into the tournament as massive favorites to win. However, their group stage performances were very lackluster as they dropped games to China’s Royal Never Give Up, NA’s Counter Logic Gaming, and two games to the LMS Flash Wolves. They ended their group stage with a 6-4 record, seeding them into the bracket stage in fourth place. Matched up against Royal Never Give Up in the semifinals, SK Telecom started to regain their form, beating them 3-1. They then proceeded to beat Counter Logic Gaming 3-0 to win the event and give them the trophy that barely escaped them last year.

During the 2016 LCK Summer Split, SK Telecom started the season strong with a 5-0 score in series and a 10-0 game score. However, they started dropping sets to lower-ranked teams, notably the Afreeca Freecs, who failed to win even a single game against the entire season. With a 13-5 scoreline in series, SKT placed second in the round-robin, beating KT Rolster via game score tiebreaker. However, during the 2016 LCK Summer Playoffs, they met KT Rolster in the semifinals, where they were reverse swept 3-2 after going up 2-0 in the first two games. This gave them a third place for the summer split. Combined with their first-place spring finish, as well as the victory of the ROX Tigers over KT Rolster, SKT qualified to the 2016 Season World Championship on points as Korea’s second seed.

At the 2016 Season World Championship, SK Telecom T1 was placed into Group B, along with LMS’s Flash Wolves, NA’s Cloud 9, and China’s I May.

Successful Marketing Ads for Your Business